While the modern human Homo sapiens sapiens subspecies evolved from the ancestors of Old World monkeys (e.g., baboons, rhesus macaques) approximately twenty-five million years ago, many of our modern social behaviors are remnants of our evolutionary past. All primates, both human and non-human, live in social groups that sustain life by promoting cooperation and group cohesion. In fact, all social animals arrange themselves into groups with non-random structures that influence cooperative social behavior, including mating, food gathering, patterns of association, and social learning. The importance of group structures gives rise to a dominant supporting behavior: primates constantly act to maintain long term relationships. 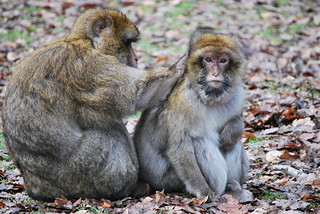 In non-human primates, grooming is the primary behavior to maintain social relationships. Grooming typically involves reciprocated sessions, often temporally distinct, in which one monkey combs the hair of another to remove parasites. In addition to its anti-parasitic benefits, grooming plays a larger sociopositive role as the most fundamental form of social intercourse — it is related to fighting and dominance, reproductive behavior, and kin relations. Grooming typically mirrors the group hierarchy, so the despotic alpha male directs and receives the most grooming. Overall, public sociopositive grooming behavior, which monkeys observe and track, plays an integral role in creating and maintaining primate social structures.

Social network analysis is one method particularly useful in understanding social structures of groups due to its ability to describe networks in terms of relationship properties and patterns. Techniques from this field have been used to investigate social behavior in a variety of species, including buffalo, elephants, dolphins, and fish. Both monkey grooming and Facebook status likes and comments have several structural commonalities that enable the social analytic approach: the behavior indicates public dyadic appropriation among individuals, and the reciprocal relationships encapsulated in dyads help maintain social relationships, including perceived hierarchy and rank.

I used the Facebook API to scrape twenty-five status updates with likes and comments from over 100 individuals (anonymized) in my network. I coded each like or comment as one directed link from an individual to another, and constructed an egocentric network for all individuals in the network using Pajek. (Pajek is easier to use for quick network explorations than R.)  After removing myself from the data set, the resulting network was comprised of vertices (nodes) representing individuals and arcs representing the interaction strength between each individual (M = 2.17, SD = 2.30, MIN = 1, MAX = 18). I extracted the largest component for comparison with the primate data.

I assembled the primate social network from an academic paper with detailed observational data about the grooming behavior of free-ranging rhesus macaques (Macaca mulatta) on the island of Cayo Santiago, Puerto Rico, a population still used today in comparative cognition research. Rhesus macaques are so similar to humans that 60-70% of all National Institutes of Health grants involving primates use this species. I coded the directed dyadic grooming behavior for all sixteen monkeys, represented as vertices, and the collective grooming duration as the arc strength (M = 6.10, SD = 10.36, MIN = 1, MAX = 63).

Since primate and human social systems differ in size and density, I focused on the quality of network structure and the constituent relationships. Descriptive measures of each network are listed below. The Facebook data had fewer nodes (vertices) than the monkey data (11 vs. 16), and there were fewer directed ties between nodes in the Facebook data (35 vs. 110). These differences lead to two important considerations about the underlying type of data collected and the nature of the types of interactions that produced these networks. While the monkey data was representative of the sum total of interactions that occurred between all actors in a fixed population, the Facebook data represents a slice of one type of interaction of one subgroup of a population. At the same time, while grooming behavior is the primary form of reciprocal behavior in primate networks, Facebook status liking and commenting are just one of many forms of this type of behavior for humans.

Network density is a measure of the proportion of actual arcs relative to possible arcs. The monkey network was 50% more dense than the Facebook network, thus indicating more links between individuals.

All measures of Facebook and monkey network data (“vs.” expected values)

The three primary measures of centrality — betweenness, closeness, and degree — indicate the importance of a node in a network based on structural positioning.

One tool to understand the patterns of connections between individual nodes in a network is the triadic census. Directed links between three vertices are called triads, and these links can be organized into sixteen distinct combinations (below). The prevalence of each triad, represented as the number found in a network relative to the expected number based on the number of arcs and nodes, provides valuable information about the underlying structure of a network. 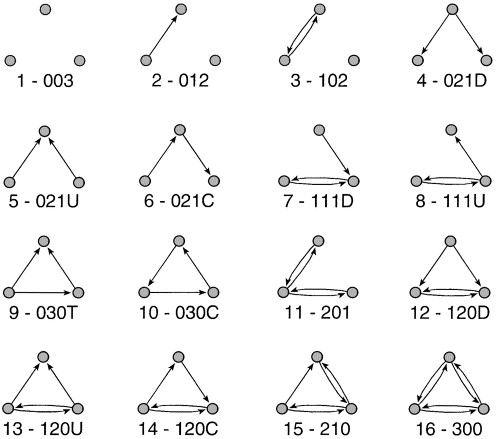 According to balance theory, individuals seek consistent relations among connections and act to reduce the number of intransitive triads. There are two types of triads that are prohibited in balanced networks: forbidden triads – in which A has two friends B and C, where B and C are not friends with each other, identified as 201 – and transitive triads, in which triads are at different hierarchical levels, identified as 012. A balanced network should have fewer triads classified as 201 or 012, because stable networks require symmetry. Both networks exhibited more 201 forbidden triads than expected, and the monkey network showed significantly more 012 transitive triads. Perhaps the greater ratio of found to expected triads in the Facebook network (7:1) versus the monkey network (2:1) indicates that Facebook networks are less “real” in the sense that relationships that should not exist are relatively prevalent. The presence of many non-permissible transitive networks (012, 210) indicates a tendency towards hierarchy. On the other hand, the overrepresentation of the 300 type triad — individuals in the same clique with complete mutual reciprocal influence — in both networks indicates that more balance than normal. In fact, the Facebook and monkey networks were 35 and 7 times more reciprocal than expected. The combination of balanced reciprocity, intransitivity, and hierarchy point to similar network structures that are hierarchical in global structure but have intra-level balance.

The absence of specific triad models is also interesting. Most notably, there was an underrepresentation of 021 triads, in which two nodes have unidirectional links to a single third node. This triad would represent a situation in which two monkeys groom a single monkey, but receive no grooming in return. It would have been surprising if this type of triad were frequent in either network, given the reciprocity inherent in both social behaviors. Similarly, the 030 triad model — in which each node is unidirectionally linked to exactly one other node — was also underrepresented. This triadic model of indirect reciprocity would be antithetical to the public signaling inherent in both monkey grooming and Facebook status liking.

Conclusions & Thoughts
So, what can monkeys teach us about Facebook? At least in this brief analysis, we can uncover striking similarities and important differences between rhesus macaque grooming and Facebook likes and comments networks:

The coexistence of balanced but hierarchical triads is a particularly puzzling outcome of the analysis. An analysis of intra-level cliques would provide a closer look at how different hierarchies interact and the relative strength of the ties within hierarchies. Similarly, only the alpha male node was identified in this data set, but there are important structural differences based on the age of each actor. Understanding the correlates between structural position and monkey age could point to underlying variations in how different genders and ages are included into social fabric of a primate colony. A similar comparison could be conducted with individuals joining social groups, with a time-series analysis offering a structural view at this process. Collecting this sort of data would require an enormous amount of behavioral observation, but future research in this area might yield answers to interesting questions about the primitivity of prosocial networks.