As I wrote in an earlier post, there are multiple forms of rationality. When psychologists find deviations from rationality, they usually refer to violations of rational choice axioms – i.e., procedural rationality. There are multiple ways to think about procedural rationality, but the most common axioms are derived from utility theory. In the literature, these axioms are expressed in first-order logic, which can be difficult for the casual observer to unpack. To make things simpler, I’ve explained the five most important axioms using visuals. 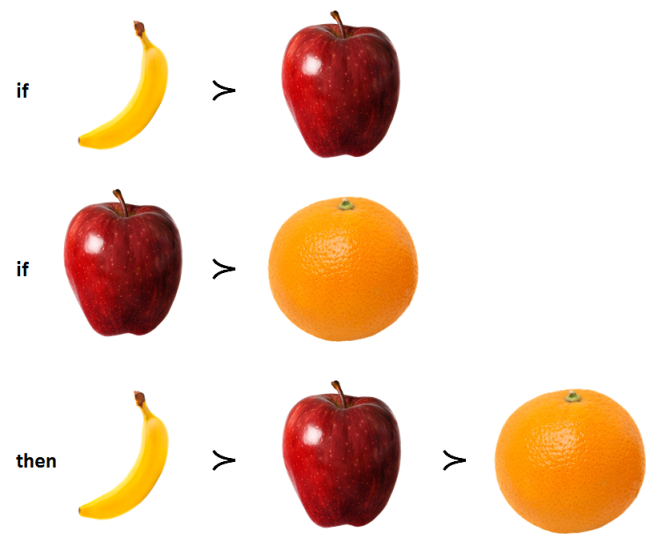 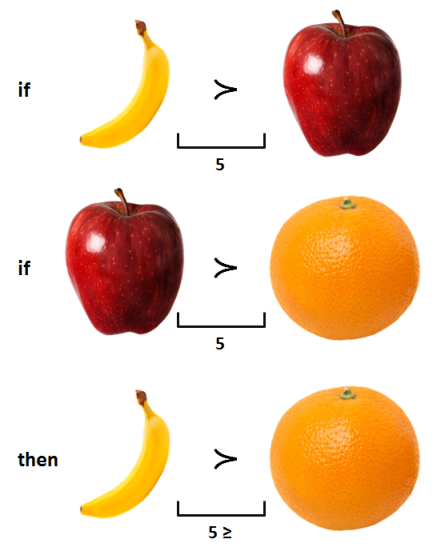 Independence of irrelevant alternatives
The independence of irrelevant alternatives axiom holds that a preference ordering must not change when the choice set is enlarged. For example, imagine that your are given the choice between a banana and an apple. Assume you prefer the banana. Now, imagine that I add an extra option, an orange. Regardless of how you feel about oranges, you can’t suddenly prefer apples over bananas. Adding an orange to the original banana and apple choice set is irrelevant to your preferences between bananas and apples. Whether you prefer apples or bananas is strictly a consideration between those two options, so your preferences between those options must be independent from other options, such as the orange.

Regularity
Regularity, sometimes referred to as property α, is a stronger form of the independence of irrelevant alternatives. It’s best to think about regularity at the market level. Regularity holds that the absolute preference for an option cannot increase when options are added to the choice set. For example, imagine a market only comprised of bananas and apples, and assume that 60% of sales are for bananas and 40% are for apples. Now imagine we add oranges to this market. Regularity holds that the absolute number of bananas sold should not increase beyond the original 60% of absolute (total) sales in the pre-orange market. With the addition of oranges, the market share of apples and bananas should either maintain or decline, but never increase. 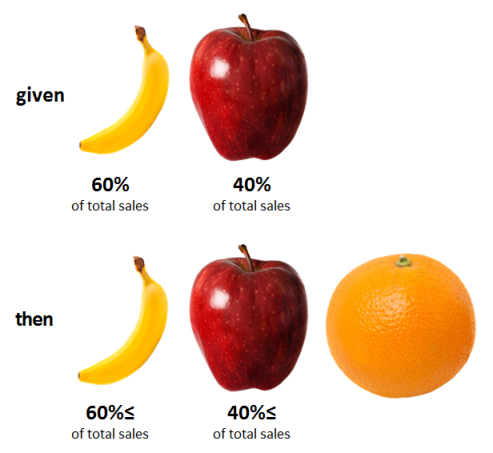 Constant-Ratio Rule
The constant-ratio rule is a weaker form of the independence of irrelevant alternatives. It demands that the ratio of preferences between choices (i.e., relative preferences) hold constant as the choice set expands. For example, in a market with bananas and apples where bananas are preferred at a 1.5x ratio to apples, the addition of oranges should not change the initial relative preference ratio of bananas over apples. 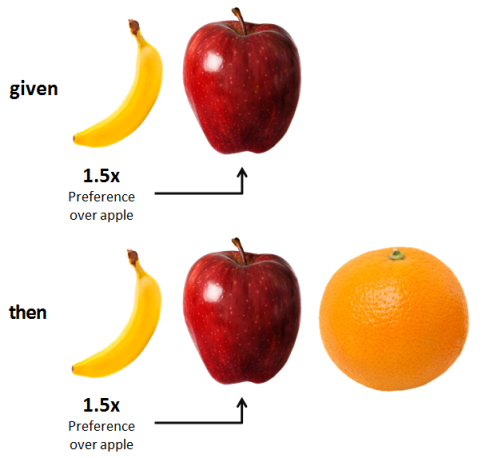